Early Bremerton business buildings were crudely constructed, fragile structures. Local residents knew that a fire of any size could destroy the entire town. Mayor Croxton, who was acting volunteer fire chief, called for volunteers for the fire department on May 7, 1901. At a May 13, 1902, meeting of the City Council, a committee was named to establish the volunteers headed by City Councilman C. Hanson and including Thomas Driscoll, J. J. Murphy, Asa Coder, William Moffett, a Mr. Thomas and Lott. By August 6th, 24 volunteers had enrolled and the council appointed Murphy as Chief. He was a Naval Warrant Machinist at PSNY.

Fire Chief History
In January 1903 volunteers were allowed to select a chief and they picked J. D. Humble. He had served 12 years in the St. Paul, Minnesota, Fire Department and, the Bremerton News reported, "his long experience will no doubt enable him to give a service to the people." He had been captain of Fire Company #1. Other members of that company were William Hanson, Herman Renn, H. R. Abbott, J. Provost and Frank Clay. C. C. Collins was the 1st captain of Station #2 and Joseph Gamex of Company #3. 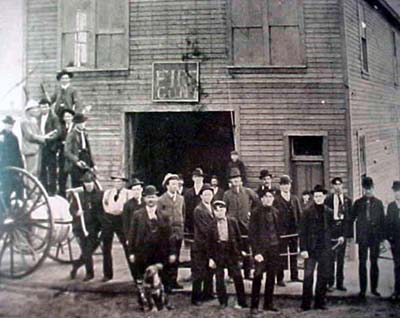 He was succeeded as chief in 1907 by Alexander Watt who remained in office until 1914 when Murphy elected chief at a special election. He retained this office until 1921 when Arthur Olsen was appointed by Mayor Giles. In February 1922 "Shippy" Lent was appointed by mayor Bowdoin. Lent originally joined the department in 1907. The first organizational meeting was held the following week. Councilman Hanson reported that hydrants and hose had been ordered but hadn't yet arrived.

Fire Equipment
The town's 1st major fire after volunteers were enlisted was at the rental owned by Dr. George Warmburg on September 20, 1902. The bucket brigade was kept busy keeping the fire from spreading to adjoining buildings on Washington Avenue. At the September 22, 1902, council meeting, purchase of a $175 hose cart was approved as well as hooks, ladders and firefighting buckets. Mr. Hanson suggested that the company test the hose and have a drill immediately on the delivery of the cart.

When the equipment arrived in December 1902, Chief Murphy arranged for a fire alarm to be installed at the station located in the J. E. Wood Company building. Two other fire companies were located on Pleasant Avenue and Veneta near Fourth.

Proceeds from the 2nd annual fireman's ball held in February 1903 were used to purchase belts, rubber coats and hats. The entire volunteer fire department budget was generated through social events.

The fire alarm system was a triangle mounted at the main station. When a fire call came in, the 1st arriving man rang it to alert volunteers. Up until this time several rifle shots were fired to signal an emergency. It wasn't considered a good system because the town was noisy with dynamite, used to remove stumps, often exploding. The alarm system quickly became obsolete. Profits from this second 1903 fireman's dance were earmarked for a bell tower to be mounted atop city hall. W. A. Mohr received the contract for $35.80 to build the tower. It wasn't until early March 1904 that a 595-pound bell was purchased to sound the call for the volunteers.

Refuse near the temporary ordnance building in PSNY triggered the Yard fire whistles and a line of hose was connected along the north fence. The hose cart with additional hose was at the gate within 5 minutes.

Horse Team
The city appropriated money to modernize the department and the 1st horse-drawn hose and ladder wagon were purchased although the wagon didn't have a pump which meant that firefighters had to rely on water pressure from hydrants.

As the city didn't allocate funds for a horse team, the council ratified payment of $2 to anyone who would pull the cart to a fire, or $1 just to tow it when needed. Within 3 months the offer was raised to $5 because there was such little interest. At $5 competition was frantic. When the fee was raised, the town's clanging bell found locals clogging the streets with wagons as their owners unhitched horses and raced to the firehouse. It soon became a contest between Barney Iffert and Bob Hammond. This lasted until February 1904 when a team was donated to tow the fire cart, and the city purchased a team, withdrawing the $5 prize. There was 1 paid fireman at this time whose main duty was to hitch the team and drive the hose cart to calls.

The daily routine for the paid man and Chief was to hitch up the 2 horses and, for exercise and training, trot the team around town. The wagon had iron wheels and carried considerable coiled hose, a chemical tank, several ladders, axes and a number of soda acid fire extinguishers. As the wagon had no pump, the chemical extinguishers were the only way of putting out small fires. In 1904, the Kitsap Review commended the volunteers for their prompt actions in quelling a gas explosion. Chief J. L. Humble stated: "I am proud of my firemen."

Humble came to Bremerton in 1902 and was employed in PSNY, was in business as a contractor and builder, and operated an auto transfer business. His son, Andrew, was a volunteer firefighter at the age of 13. Andrew later worked in construction throughout the west and following service in France during WWI, returned to Bremerton, retiring from PSNY 1944.

Putting Out a Fire
The 1st false alarm came in at 1 a.m., June 9, 1904, following in September by destruction of a building, valued at $100, blamed on a broken rope to the bell tower.

The horses were trained to dash from their stalls without guidance and take position beside the tongue of the wagon. The harness was suspended above the tongue and was spread open in such a manner that the fire fighters could release a rope and the harness would drop into proper position on the backs of the horses. The drivers then secured a few buckles and snaps, climbed onto the seat, secured his own belt, and dashed to the fire. This could be accomplished within 60 seconds. Nearby volunteers could catch a ride if they were quick. The others ran in the direction of the clanging wagon bell or rising smoke.

During these early days, the department rarely saved a burning building, the main reasons being construction, delayed response time, lack of water and manpower.

As part of the city's fire defense system, small hose cart stations were built at 14th and Park and 4th and Veneta. Volunteers' sole equipment was a 2-wheeled hose cart that had neither ladders nor fire extinguishers. Other neighborhoods organized fire companies, the 1st (in January 1905) was Bayside Fire Company funded by residents living on Pleasant and Highland Avenues north of 6th Street. They raised $254 to build a structure to house the cart. Another was organized on Dock (now Park Avenue) in April 1905. The Fireman's Ball was interrupted in March 1906 when Jack Smith's Louvre Saloon caught fire. The building burned to the ground, but the volunteers managed to save the whiskey. Fire units from PSNY assisted in the effort by pumping saltwater on the roof of the 2-story building.

After selling the city hall property (located near 4th on Pacific which housed some city services, jail and fire department) a new structure was built at the approximate site of the present city hall and services were moved in March 1909.

Regulating Building Construction
Ordinance #414 regulating downtown building construction was enforced in 1912. Before this, Bremerton had few "fire proof" buildings. The majority of buildings were wooden shacks with awnings or tents. The architectural appearance of the city began to change. But the ordinance didn't help owners stricken by 2 major fires. A fire in July 1912 at the corner of Front and Pacific (long known as the Bremer Block) was nearly wiped out by fire in the middle of the night. The blaze started in the rear of the candy store of George Marcus. Bremerton and Marine Fire Departments responded with a stream from the salt water mains. The block was saved from complete destruction although the candy store was gutted and flames spread to the Pioneer Pharmacy. Water poured on the roof of the Brown building drenching a large inventory of clothing. The block was rebuilt the following year with the imposing Bremer Building that still stands. In October 1913 another fire on Front Street burned the Flieder store and other nearby businesses in the middle of the block include Jake Cohen's tailor shop and Millar's rooming house.

Hiring a Staff
Humble was reappointed Chief. With the regular volunteers "striking", the city hired 1 man to serve as a full-time firefighter, 365 days a year. Humble managed to find several volunteers from PSNY, but they weren't trained and most hoped that a fire wouldn't start. Once when the paid driver left the firehouse to get a haircut he left a trustee from the jail in charge. When a reported fire came in, the trustee sounded the alarm and released the horses from their stall. Instead of stopping in front of the wagon, as they'd been trained, the horses bolted out the doors and galloped off. Several people managed to pull the wagon to the house fire where the new volunteers took over. They unrolled the hose and tried to connect it to a hydrant, only to discover that they had laid it backwards and the couplings wouldn't fit. Then the neighboring house caught fire.

A solid line of ex-volunteers lined the sidewalk, arms folded, cheering at each mistake, and calling for the city fathers to help. Before the melee was over, 3 houses had burned. It was then that the City Council recognized that the fire department should be staffed by regular volunteers.

In December 1915 Bremerton bought its 1st fire truck, a federal purchased from the Girlinger Motor Car Company for $2,950. It had a 30 h.p. engine and, obviously, didn't go too fast. And it was not effective as it had no pump, so it relied on hydrant pressure. It was to be Bremerton's 1st line apparatus for the next 9 years. With this the horse and wagon days were a thing of the past. Sero Migliavacca, president of Citizens Bank and a resident at 4th and Veneta owned 1 of the 1st cars in the city and when neighborhood alarms came in, Migliavacca backed his Stoddard Dayton touring car out of the garage and raced across the street to hook up to the cart. Away he went in the direction of smoke with hose cart bouncing and swaying behind the Migliavacca car. Those volunteers arriving earliest were lucky in that they got to ride in the car, while those who were late ran behind in a cloud of dust with dogs and kids running with them.

Bunker gear was furnished, but boots were not. Blankets and pillows were furnished by the city, but the men furnished their own linens. "Shippy" Lent who retired on disability January 1, 1937, was the 1st chief to retire under the state civil service commission. Three months later the department moved into its present headquarters at 817 Pacific. At that time it was considered one of the most modern stations on the West Coast.